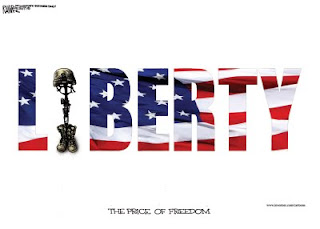 We owe what liberty we have to those who gave their lives to preserve it. God bless the US military.
Posted by SkyePuppy at 2:11 PM No comments: 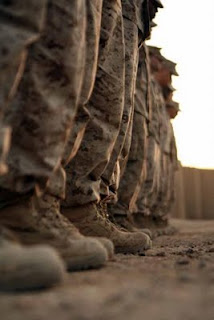 I realize that Memorial Day is not about our living service members, but is a day for remembering those who died in service to our country. This column, however, by a former Marine who served in Iraq, captures the heart of many of the men and women who volunteered to put their lives on the line to fight those who would destroy us if they could. He writes a thank you to Islamic extremists:

As I write this, I can't help but think how ironic it was that your attacks on September 11th took place during my economics class. Further reason I am so compelled to write you now. I watched the second plane crash into the World Trade Center live from my school's computer lab, as well as the ensuing chaos and massive loss of innocent life. Little did I know, your attacks proved to be the foundation to save my guilty soul...

With my grades in the gutter and graduation approaching I had planned to stick to the standard script of an American youth at that time. I was going to go to college. Now I know I said my grades were in the gutter, and they were, but in this great country even the worst student with a high school diploma or G.E.D. is given the opportunity to better himself through attending a community college. I told my parents that was what I was going to do, and that if I was unsuccessful at community college then I would join the Marines. It did not work out exactly to plan. Over that summer, my best friend died in a senseless car accident, no doubt attributed to the irresponsible behaviors we were practicing. This was a wake-up call not only to me, but also to those who today are my best friends. I was not going to waste my time nor my family's money on community college when I now knew I needed to change my life and do so immediately. And thanks to you, my country needed me, it needed my brothers, and it got us.

I would end up serving three tours of duty totaling 19 months and 21 days in Iraq. I witnessed firsthand an uneducated, close-minded, poor populace led by a twisted ideology, and realized just how lucky I was to be born in the great nation of America.

Thank you, Islamic extremists, for opening my eyes. 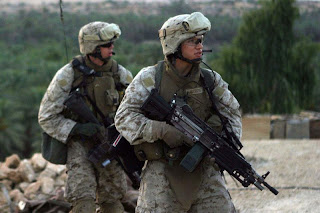 You have declared us your greatest enemy, but you are not ours. In fact, you are an unworthy adversary. America's greatest enemy is itself. America's greatest enemy is the complacency that we tend to have because we have it so good here. But you woke this sleeping giant on 9/11 and reinvigorated generations of Americans to answer the call in any and every way they could. Thanks to you, an increased percentage of my generation has voluntarily served in the greatest military to ever exist. Meanwhile in your countries, young boys are forced to fight, impressed into service after being snatched from their villages. The young women whom you [would] deny education and personal freedoms through Islamic Sharia law throughout most of the Middle East continue to serve America honorably and excellently throughout the ranks of our military.

And there is still more I would like to thank you for, Islamic extremists. You cannot break the will of this country, or that of its people, and while you won't stop trying, you will only succeed in making us stronger. With every sand-lot plot of yours we foil, every amateur video you shoot with our thrown-away camcorders spouting your anti-American propaganda, millions of Americans are taking it personally, and doing something about it. You have given us something to fight for together. You've taken selfish, lazy youth like me and turned them into great Americans, great people who are physically and mentally equipped to deal with anything you throw at us. With the constant threat of your cowardly attacks the people of my country are ever diligent to protect each other and the morals that bind us together. Without you and your actions in the past, present, and future, I promise you our focus would not be so clear as we set our sights on you. 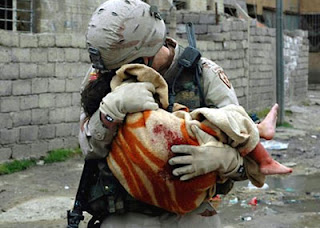 I thank you for showing me your disgusting, degenerate, and devolutionary hate for us. It has made me realize how beautiful, gratifying, and important is love for thy fellow man. Everything you stand for is wicked, and everything you fight against is true. The very principles you dedicate every waking hour to destroy are made 1,000 times stronger for each attempted pass you make at them. Your closed-mindedness has opened the minds of all mankind, and long after you are gone, dwelling in my God's basement for eternity, good men such as I will prosper. Through your weakness, you have made The United States of America stronger, and I will be forever thankful.

These are just excerpts. Be sure to read the whole thing.
Posted by SkyePuppy at 12:24 PM 1 comment:

Telling All About Palin

Power Line has this on the recently released "tell-all" book about Sarah Palin.

The Associated Press is excited that a former aide to Governor Sarah Palin has written a "tell-all" expose[.]

It may be a tell-all, but Mr. Bailey evidently doesn't have much to tell. In paragraph 13, we finally get to a specific claim: that in 2006, Palin's campaign for governor "coordinated with the Republican Governors Association, or RGA, in violation of campaign rules." The purported violation apparently consisted of Palin being filmed entering an Anchorage hotel. Whatever. This is what the AP calls "scathing?" Surely Mr. Bailey's "tell-all" has hotter stuff than that.

No, actually, it doesn't:

Mr. Bailey said the final straw for him came in the summer of 2009, when Mrs. Palin didn't attend a rally he believed she repeatedly had agreed to attend, for supporters of a voter initiative to require minors get parental consent for an abortion.

Wow, you can really see how that pushed Bailey over the brink, coming on top of Palin's being filmed walking into a hotel. In reality, it is a testament to Governor Palin's rectitude that a former aide who wants to get rich by writing an expose can't come up with anything better than this.

Boy, it sure must stink to be a Palin aide. No juicy gossip to sell to the highest bidder. Just clean living and clean air.

Did the world start ending somewhere else and it's taking a while to get to California?

Did the Rapture happen and my roomie and I got left behind? I doubt that one, because I didn't see any accidents where cars were unmanned and had crashed into buildings and other things, causing chaos and mayhem.

Hmmm... Could Harold Camping have been wrong? Again?
Posted by SkyePuppy at 7:45 PM No comments:

Another great one from Michael Ramirez: 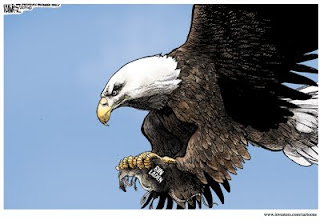 Posted by SkyePuppy at 7:59 PM No comments:

But before that: A couple weeks ago I arrived at the movie theater earlier than my friends and I had scheduled, so I wandered around the shops nearby. One of them is Clay 'N' Latte, where you can go to paint ceramics with your friends, and they had pink flyers announcing their Mother-Daughter Tea Party special event, which just happened to be on my birthday.

The party consisted of mother and daughter painting a little tea set while drinking tea and eating scones and other tea-compatible delights. When I told my daughter about it, she loved the idea as much as I did. This is the set they had on display to show us how cute it could be. 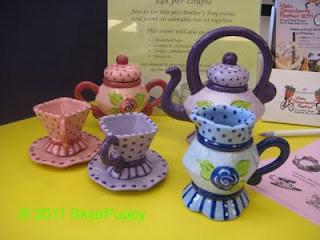 We were assigned to a small table at the front window, and our blank tea set was waiting. 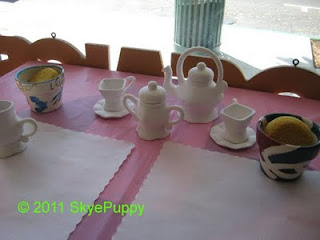 The first order of business was to wipe each piece down with a damp sponge. 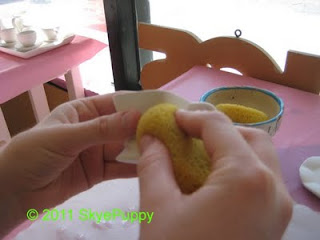 Next was choosing paint colors. The paints look different from the way they'll be on the finished product, so you have to go according to the finished samples on the yellow wall. Each color shows what it looks like with one, two, or three coats. 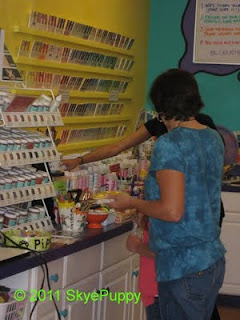 We decided to make our set look like the sample, because it was so adorable, so the girl prepared our base colors and we were set. Of course, we got some tea and goodies to fortify ourselves for the task. 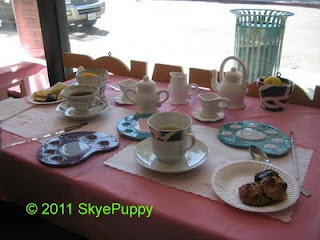 These are the purple items with three coats of the base color. The white parts still needed the darker contrast color. 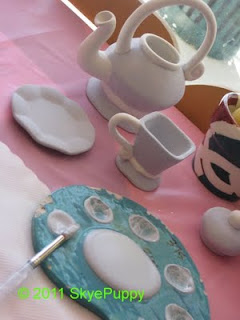 The party was scheduled for two hours, but we took a lot longer. Our conversation was punctuated by "Oops" quite a bit, followed by either grabbing a paper towel to wipe off the messed up spot or by painting over the splotch if it wasn't too far out of the lines.

We had planned on meeting my son for lunch, but our lunch time came and went while we painted multiple coats, so my son came to sit with us while we finished. It was great just hanging out over paintbrushes and dot-making bottles.

And here's the final product of the day. 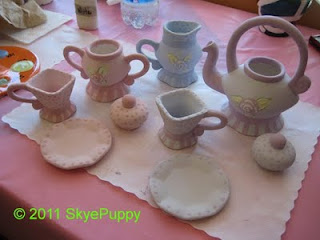 They'll be firing everyone's tea sets during the week, and we'll be able to pick them up next weekend, just in time for Mother's Day.

It was a great start to a wonderful birthday.
Posted by SkyePuppy at 7:48 AM 2 comments: