When I was in sixth grade, in San Diego, we were required to take Spanish. We learned the basics, like:

I was pretty good at it, but I resented having to learn it, so I was determined to hate Spanish.

At the end of that year, they handed out questionnaires to the students who got an 'A' in Spanish (yes, I liked getting A's, even if I had to speak Spanish to get them), asking us to choose a language preference for junior high for a new program they were starting. Instead of waiting until high school to teach languages, besides sixth-grade Spanish, they were going to start in seventh grade and needed to know how many kids wanted which languages. We were to rank in order our preference for Spanish, German, or French. I picked French first, German second, and Spanish last.

After all the votes were tallied, there wasn't enough interest for a German class, so the kids who picked German got their second choice. Everyone else got their first. We ended up with two Spanish classes and one French class, and I was thrilled not to have to take Spanish ever again.

In seventh grade, I learned the basics of French, like:

Our teacher started us, the first two weeks, with nothing but memorization and repetition. We were not allowed to see written French until the third week, and when we did, it blew our minds. So many letters to say so little! Like the word for water, pronounced "oh," is spelled eau. It took a while, but eventually we got the hang of spelling and pronouncing.

I studied French all three years of junior high, and at the end of ninth grade, my dad retired from the Navy, and we moved to Montana where they didn't have the special program that started languages in seventh grade. So I took Senior (fourth-year) French when I was a sophomore and had to go my junior and senior years without it. Then I took a full year of it my first year of college. By the end of that year, I was mostly thinking in French and spoke it fairly fluently for someone who learned it in school.

Sometime during all that studying, though probably not in the first year, one of our teachers mentioned Le Petit Prince - The Little Prince - a classic children's book that I think we read in class. I loved it. 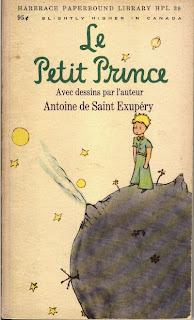 A long time later, after I was married and had little kids, I saw the book, in French, in the bookstore, and I bought it to refresh my skills. It was every bit as wonderful as I remembered. Even the French words seemed to make it more charming. In the first chapter the author talks about a book he read as a child, about the wildlife in the virgin forest. The phrase for wildlife is animaux sauvages, which is literally, "savage animals." I just love it!

In the evenings, I would sit both kids on my lap and "read" the book to them, translating from the French with only the occasional help from the French-English dictionary. I loved reading the story, and they loved hearing it.

Eventually, I found the book in English, and I bought that one too. 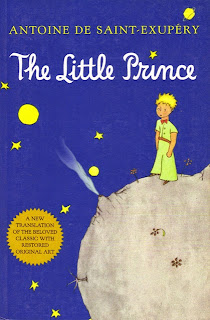 It made things easier when I needed help with my translations. I simply had to flip to the page with the fox picture to see that apprivoiser means "to tame."

Time went by, and the books got packed in boxes for all our various moves, only to be pulled out again whenever I came across them. I always went for the French version and read at least the first few chapters to make sure I still could. I hadn't realized how well-ingrained in my mind those chapters became.

Last week, in my nightly Bible reading, I finished reading it all the way through. After the close of Revelation, I went to my bookcase shelf with all my Bible-studying books, looking for a topical book to do before I start my next time through the Bible again. I selected one that has a workbook to go with it, and when I pulled the two books out, The Little Prince, in English, was tucked inside the cover of the workbook as though I hadn't paid attention when I had put it away. I'm not sure where the French one is.

I brought The Little Prince to work to show to one of the guys I had mentioned it to not too long ago, and I made it available to anyone in our group who might want some light reading at lunchtime, but there were no takers. So I picked it up to read over lunch myself.

It's not the same. It's in English.

I keep hearing the French in my head as I read it. The dedication page ends with, "To Leon Werth when he was a little boy," but I hear, "À Léon Werth, quand il était un petit garçon." In the first chapter, the picture book called "True Stories" is "Histoires Vécues." The boa constrictor is un serpent boa. And in the second chapter, the little prince demands over and over, "Dessine-moi un mouton."Finally, I put the book down. I couldn't read any further for all the French interruptions.

One of these days, I'm going to have to go hunting for that familiar, beloved white cover. And then I'll sit down in a cozy spot with a nice cup of hot tea and the blue-covered translation on the table beside me, and I'll start reading. And the characters and the drawings and the words - en français - will come to life for me once again.
Posted by SkyePuppy at 12:10 AM No comments: