It's a given that I need to get a lot of my slides scanned, but what about the photos? In the back of my three-ring binder with the slides in sleeves are some black-and-white photos. The snapshot-sized photos have sleeves of their own, and three 8 x 10 prints are loose. None of either size are dated or labeled.

As near as I can tell, all the snapshots were taken sometime between mid-1981 and early 1984, but I'm leaning toward the '81 - '82 timeframe. The pictures were all developed together, with rounded corners. There are half a dozen photos of the white-water canoeing trip we (my then-husband and I, and possibly his youngest sister) took up to the Kern River when we were taking some safety-oriented canoeing classes through, I think, the Red Cross. That puts us in California, either pre-mid-1978 or post-July 1981. Between those dates, we were in Spokane, Washington.

The other photos from that roll of film include two shots of our cat, Quackenbush. We acquired him and his best-buddy, Wickersham, when they were teeny-tiny kittens in Spokane. So the pictures had to be after we returned to California in 1981. 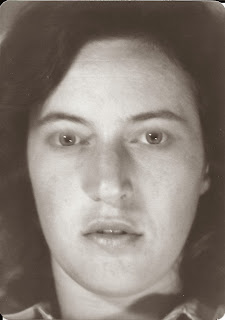 There's a picture of my husband and another of him and his sister talking, but I haven't asked for their permission to publish those photos. Quackenbush doesn't care if I post his picture: 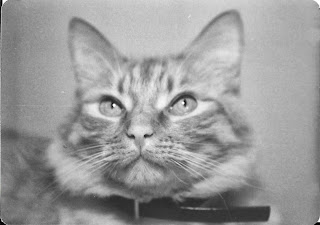 He wasn't a very smart cat, so he had to get by on his looks, which he did just fine. See how he's wearing his flea collar? It worked great in Spokane, where the fleas die down during the winter. In California, though, which has year-round flea season, the collar didn't do anything. And nobody had invented Advantage or its like at that time. And the fleas liked me better than they liked the cats. Aaarrrrgggghhh!!!!

The 8 x 10 photos were from the photography class I took when we were still new to Spokane. This is the class that first taught me about the Rule of Thirds. Part of the class was working in the darkroom to develop film and make prints. We only used B&W for the darkroom portion of the class. When it was time to use color film, our instructor had us use slide film. We had an assignment to choose a tree, any tree, and take a whole role of slide film of that tree from different angles and times of day. The second assignment was to take a whole role of slides of one person, and of course I picked my husband for that. We had to include at least one double-exposure shot.

One of the requirements of the photography class was that we had to have a 35mm camera. All I had was the Kodak Instamatic I got for my birthday one year in late grade school. It took the 126 cartridges. But my husband had an old Argus C3 manual camera that used 35mm film, and you had to use a separate light meter and then set the aperture and shutter speed accordingly. That's the camera I used for class, and the instructor kept telling the other students (who all had SLR cameras), "If she can do this with that C3, you should be able to do it too!"

Here are the three 8 x 10 shots that I developed. First is Wickersham: 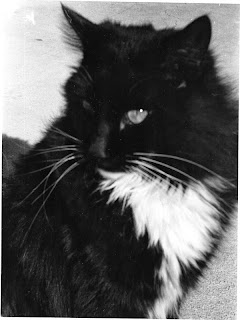 He's the smart one. The white patch on his chest extended all the way up to his chin, and he had a good-sized black dot in the white just behind the jawline. Whenever he slept with his head upside-down, the black dot would show. Very cute!

This is an old concrete bridge over the river in Riverfront Park: 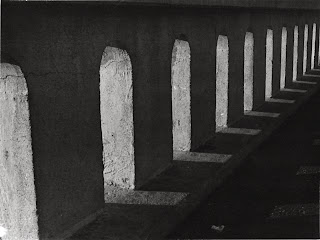 I had hoped it would be more contrasty for the black-and-white film, but it wasn't.

This was one of my night shots, also in Riverfront Park: 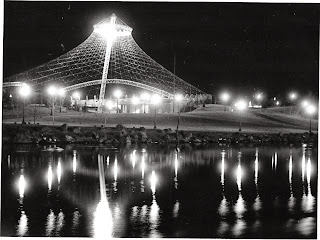 I had thought that since I have the printer/copier/scanner, I could scan the photos myself and just concentrate on sending slides to the scanning company. But after I scanned all these photos, I checked the properties on the files, and they were all scanned at 200 dpi. ScanDiego will scan them at 4000 dpi. So I'm going to have to factor into my decision-making any photos I might want to blow up and frame.
Posted by SkyePuppy at 4:46 PM