The first step in getting my slides converted into digital format was to find the darned things. I went to the shed and looked at every one of the boxes in there. At times like this, I'm thrilled that I'm organized just enough to use a Magic Marker on the side and end of every box to record the box's contents. My slides were not in there.

In the garage, where all my boxes of books that I can't fit in my house are stacked in three six-high stacks and all the other boxes that didn't fit in the shed are piled, I hunted some more and finally found the box marked, "Photos/Slides Japanese Plates.' Inside the box was all of this: 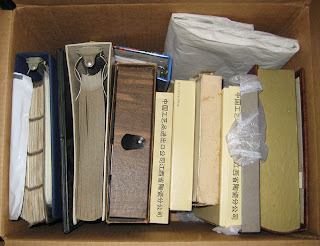 Out of respect for my back (that's a different story), I waited for my daughter to come home and bring the box in the house.

Back when we were taking our pictures as slides, we had a Bell & Howell slide cube projector, not a Carousel projector like everyone else, and the brown fake-wood-looking box had the cubes with all the slides from our big bicycle trip through Europe in 1983, plus a few cubes with slides from other trips.

I was able to make a good light box by using my computer and opening my Nook application to a book with two nearly blank pages together. By holding the slides up to the monitor, it was easy to see what they were.

After looking through all those cubed-up slides (which I had labeled with the date, location, and subject), I pulled out the photo album to the left of the fake-wood box. I opened it up, and it looked like this inside: 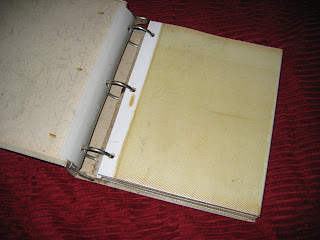 Ick! I'm SO glad there were no photos inside the "magnetic" pages. There was just one loose black-and-white photo, complete with photo-album-induced discoloration: 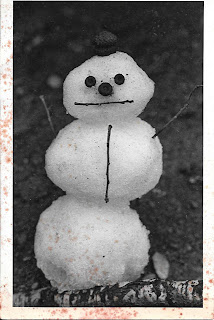 I remember making this little guy but not where or when it happened, though I have this vague sense that it might have been at Mt. Palomar and that it was before we had kids. It was a week when it had snowed in the mountains, with a pretty low-elevation snow line, so that weekend we drove up to the mountains to play in the snow. Of course, by then almost all of the snow had melted. We found one turnout on the north side of the mountain where there was still a patch of slushy snow, so that's where we stopped. We were barely able to form three regular-sized snowballs, and we stacked them on top of each other, set them on the asphalt curb, and found some acorn tops and twigs to give him personality. He's a charmer, isn't he?

After throwing the photo album in the trash, I turned to the blue binder full of slide sleeves. There were more slides from the Europe trip (all properly labeled), plus the Grand Canyon trip with the youngest sister-in-law before she got married, several shots of my nephew (who just turned 34) when he was 22 months old and I visited my sister and her then-small family in the Panhandle of Texas, and photos from the hot-air and helium balloon festival of 1981. I even have pictures of when the Greenpeace balloon got away from its handlers before it was completely filled with hot air, and it ascended (but not enough) and the basket hit the roof of some grandstands, tipping out the guy inside the basket, who was injured. The story made the local TV news that night, but I wasn't able to find a link to it for this post. Apparently 1981 was a very long time before the internet came on the scene. Anyway, I really love a lot of the balloon pictures.

The problem with most of the slides in the sleeves is that, other than the bicycle trip photos, the slides aren't labeled. I had put stick-on labels on the sleeves themselves for the first picture in a series, for example, "Grand Canyon 1st Day 11/81." I'm afraid to choose 500 of my favorites, send them in, and then get them back and not know what they are from. So my decision-making process has just become a bigger production than it already was. I found some clear return-address labels (1/2" x 1-3/4") in my supplies, and I'm printing two slide labels on each, at 6.5 pt. font, and cutting them in half lengthwise. 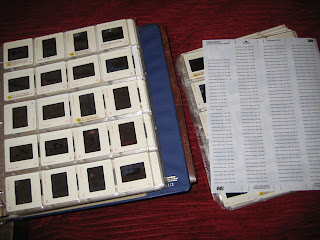 It's going to be a while before I get this done.
Posted by SkyePuppy at 8:34 AM